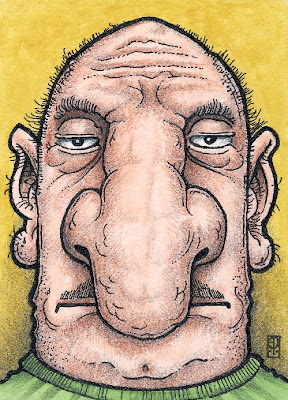 "Everyone in the little town knew about Jimmy. Not just because he was the leader of the notorious Butcher's Alley Gang, but because of his tremendous dancing ability. He had won the annual crazy legs dance competition seven years in a row. People would travel from miles around to see him perform. Even though he was greatly respected, he was forced to sleep outside the town wall because of his incredibly loud snoring. The thunderous noises were described by one resident as the sound of a drunken tuba fight."

This is the first art card in a series called Slipperytown. The series will be made up of a cast of unusual characters, each with their own unique story. Each story will be a small piece of a puzzle that will tell the larger story of this quirky little town.

You have discovered my art blog. I post my artwork here as I make it. Hang out and explore for a while.

Sites That Inspire Me

Thank you very much for visiting. Please come again.

All contents of this site ©Gene Ploss unless otherwise noted.